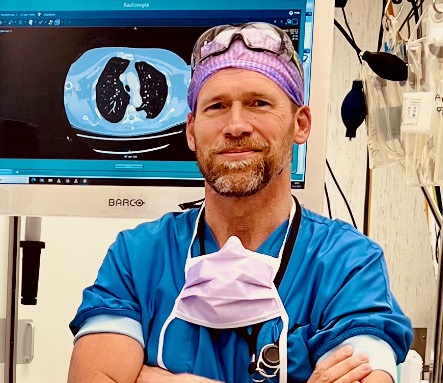 The diaphragm is the most important muscle of respiration. Impairment diaphragmatic function can have major physiological consequences. Many of these impairments are amenable for surgical correction, but correct diagnosis and treatment require thorough understanding of form and function.

An elevated diaphragm due to paralysis is an uncommon condition. It may be an incidental finding in asymptomatic patients, but sometimes it is the cause of orthopnea and dyspnea on excertion. In the latter patients the clinical condition can be improved by plication, limiting the paradoxical movement on respiration.

Dr. Welvaart developed a laparoscopic diaphragmatic plication technique for patients with diaphragm paralysis. This unique laparoscopic technique has the advantage of excellent field of vision during surgery, postoperative recovery with minimal pain and early discharge from the hospital.

Dr. Welvaart is a certified general thoracic surgeon and surgical oncologist. He worked as a surgeon at the Bronovo Hospital in The Hague, the VU Medical Center of Amsterdam, the Rivierenland Hospital Tiel and currently at the Meander Medical Center Amersfoort as the head of department of pulmonary Surgery. In 2010 he founded the Diaphragm Center. The Diaphragm Center has been functional as an independent center since April 2022.

The Diaphragm Center is there for all patients who suffer from severe dyspnea as a result of an elevated diaphragm. To be eligible for treatment by Dr. Welvaart, a referral from a specialist is required, preferably your pulmonologist. This referral will be sent by your specialist to our center. We will review your referral and see if you qualify for this surgery. This assessment by Dr. Welvaart is completely non-binding and therefore no costs will be charged for assessing your referral.

After your referral has been assessed and approved, you will be called up for the intake interview at the Diaphragm Center. With this call you will receive all information you need for this interview.

If there is an indication for surgery, we will try to organize your surgery in your own hospital.
However, your pulmonologist will then have to explore together with Dr Welvaart whether this is possible.

A referral can be sent to: welvaart@middenrifcentrum.nl.